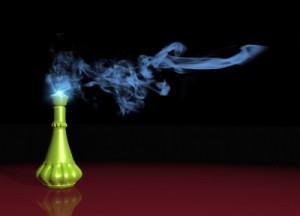 Bob and Ralph were fishing on the Irish shoreline when Bob pulled out a cigar. Finding he had no matches, he asked Ralph for a light.

‘Ya, shure, I tink I haff a lighter,’ Ralph replied with an Irish accent, and then reaching into his tackle box, he pulled out a Bic lighter 10 inches long.

Ralph opens his tackle box and sure enough, out pops the Genie.

Addressing the Genie,Bob says, ‘Hey dere! I’m a good pal of your master. will you grant me One wish?’

So Bob asks the Genie for a million bucks. The Genie disappears Back into the tackle box leaving Bob sitting there waiting for his million Bucks. Shortly,the Irish sky Darkens and is filled with the sound of a million ducks flying directly overhead.

Ralph answers, ‘Ya, I forgot to tell yew dat da Genie Is hard of hearing. Do yew really tink I asked for a 10 inch Bic?’